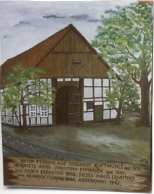 It is probably not too surprising that our family has lost touch with the Fehrings in Germany for many years -- time, distance and two world wars interrupted contact.  However, we have been able to reestablish contact. This has permitted us to trace our family history back to year 1678 to the Village of Ossendorf in an area of Germany called North Rhine-Westfalia (or Nordrhein Westphalia,*  a German Federal State) near Dusseldorf.

A drawing of the Kliftmuhl in Ossendorf

A lot of the information has been collected over the past ten years in correspondence between Richard Fehring of the United States with Theresa (Fehring) Conrad and her (now departed) husband Herbert in Germany. They and other Fehring relatives in Bad Driburg (a city near Ossendorf) have collected this information from the Church records in Ossendorf. Richard Fehring has also collected data from the genealogy library in Salt Lake City Utah.

We have been able to trace our family history to Henricus Fehring, who was born in 1678 (died 1750) in Ossendorf and married Anna Margaretha Glockelen (1689-1758) on November 11, 1718. They had four children - Joseph Henricus, Henrici, Anna Maria, and Anton Joseph Wilhelm Fehring. It probably was a good move on Henricus's part - since Anna's father owned the Kliftmuhl (the grain mill) in Ossendorf.

Now - you might wonder how could they afford all of these children. Well Anton and Eva somehow purchased and renovated the Kliftmuhl in Ossendorf in 1767. The mill was damaged in the 7 year war. All of the children had to find some way of making a living and raise a family.

Anton and Anna Maria's son, Johannes Fehring, was born in 1799 and married Charlotte Dierkes on November 11, 1824. In 1717 the community of Eissen got permission to construct a community mill on the Eggel river (which today looks like a small stream). It was built in 1720. Johannes Fehring took over the mill in 1827 but could not make a living with the mill. At that time (according to the Eissen history book) - this part of Germany was in a depression. And there were several bad harvests. So if the farmers did not bring their grain to the mill - not much money could be made at the mill.

Johannes and Charlotte had 5 children. They are:

Johannes Fehring immigrated to the United States in 1833 but died soon after on March 9, 1833 in New York city. His wife Charlotte died the following July 18, 1833. We do not know who raised the 4 living children - the oldest would have been Bernadine at 8 years old and the youngest Johannes less than a year old.

Carl and Johannes immigrated to the United States. They married sisters Helena Schulze (Carl) and Anna Maria Schulze (Johannes). Helena was born on January 25, 1840 in Borgholz, Germany and Maria was born on October 16, 1844.

The Schulze sister's parents were Johann Schulze who as a shepherd and Maria Disse. We do know that Johann Schulze immigrated to the United States and lived with Carl and Helena. He died in Schlessingerville (Slinger) Wisconsin - Town of Polk and is buried in Saint Peter's Church cemetery.

Please note -- the surname Fehring was spelled a number of ways in the Church records in Ossendorf - including 'Ferring'.  As is common for the time, the priest that recorded entries wrote the name down as he heard it pronounced.  However, by the early 1800s the name has consistently been spelled 'Fehring'. Also, Carl and Johannes's names were Americanized to Charles and John as they entered the United States.

Just a few notes on the area of Germany called Westphalia. From Wikipedia

Westphalia (German: Westfalen) is a region in Germany, centred on the cities of Bielefeld, Dortmund, Gelsenkirchen, Münster, and Osnabrück and included in the states of North Rhine-Westphalia and Lower Saxony.

The name "West-phalia" probably means "West-Plain". The second word, "Falen", is related to the Germanic words "Field", "Flat", and "Floor" (all of which are related to the Latin "Plain" through a common Proto-Indo-European root, *pele, meaning "flat, (to) spread").

Westphalia is roughly the region between the rivers Rhine and Weser, located north of the Ruhr River. No exact definition of borders can be given, because the name "Westphalia" was applied to several different entities in history. For this reason specifications of area and population are greatly differing. They range between 16,000 and 22,000 km² resp. between 4.3 million and 8 million inhabitants.

Originally Westphalia was a part of the Duchy of Saxony, until it was elevated to the rank of a duchy by Emperor Barbarossa in 1180. The Duchy of Westphalia comprised only a small area south of the Lippe River.

The dominant religion is Roman Catholicism, though Lutheranism is important in some of its regions.

There was a Kingdom of Westphalia from 1807 to 1813. It was founded by Napoleon and was a French vassal state. This state only shared the name with the historical region, it contained mostly Hessian and Eastphalian regions and only a relatively small part of Westphalia.

After 1813, Westphalia became a province of Prussia. The northernmost portions of the former Westphalia, including the town of Osnabrück, had become part of the states of Hanover and Oldenburg.

Westphalia is known for the 1648 Peace of Westphalia (in fact the two treaties of Münster and Osnabrück), which ended the Thirty Years' War.

A linguistic definition of Westphalia includes the former Prussian province (except Siegen-Wittgenstein), Lippe and the region around Osnabrück. Present-day common use, however, restricts the notion to the present part of North Rhine-Westphalia, because of the name.

Westphalia is also the location of Baron Thunder-Ten-Tronckh's castle in Voltaire's novella Candide.